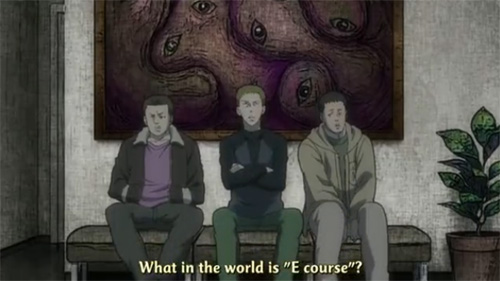 I don’t know but that painting is freaking creepy.

Episode 4 and 5 are kind of…different, because they don’t really have much to do with the ‘main plot’ of Level E (…whatever that is, exactly.) Episode four is about a group of schoolboys who witness an alien eating a girl who had gone missing and start to freak out about the ‘monster’ coming for them next. They ask a hippy for help, who directs them to a certain medical clinic where there is an eccentric doctor who knows all about aliens. After they all have to pay a hefty fee, he allows them under protection and finds out more about the story of these woman-eating aliens….which turns out to be somewhat tragic.
That is until right at the end it gets revealed that the whole thing was a story Prince Baka made up to try to ‘educate the masses about aliens’. 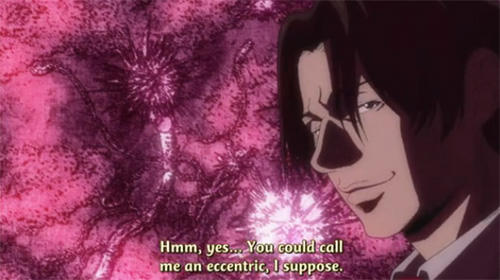 Am I the only one reminded of the playboy doctor from Reborn! by his facial expression? 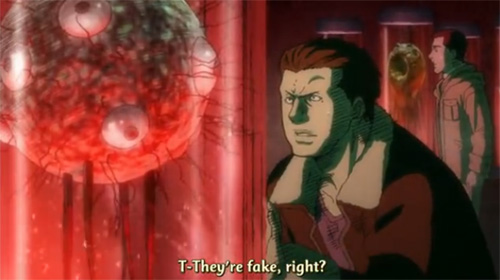 There was a lot of CG in this part…it looked pretty neat actually.

This episode was really interesting visually; everything has a textured appearance, making things look ‘grittier’, which enhances the whole horror aspect of it. It progresses like a scifi thriller grounded in realism (if that makes sense), and there’s no sight ofa ny of the main characters at all. Of course, this is because the whole episode is a story Baka came up with, which isn’t revealed until the end. On one hand it kind of cheapens everything when this happens – the story with the aliens is quite dramatic and even tragic, but it loses all that when learning it didn’t actually happen. On the other hand, Baka’s trolling is pretty funny. And for a self-contained story it is done pretty well, with a lot of suspense and intrigue despite the relatively uninteresting-looking characters. 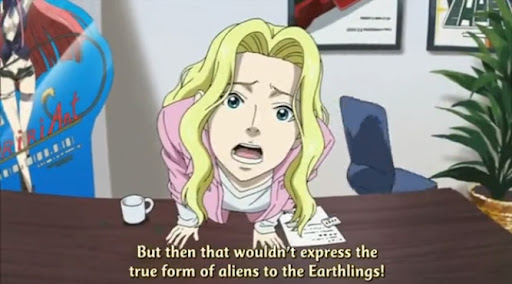 Episode 5 is the realization of the next idea Baka pitched at the end of episode 4, a ‘superpowered kids who can transform into Rangers to fight aliens’ parody. Baka plays the one responsible for giving the kids their powers…yet none of the kids are very enthused about the idea (except for the nerdy class president) and even when they learn their own teacher is an alien, would rather just let her be and instead decide that they ought to use their powers to defeat Baka instead. But, to do that they first need to defeat Baka’s ‘evil demon Kraft’.

Just like episode 4, it’s another story that has nothing to do with the main plot, but the contrast is striking. Until now, it was really hard reminding myself that this is the same mangaka behind YuYu Hakusho and Hunter x Hunter, but it’s incredibly obvious here. (The kids in this episode look like they are probably Hunter x Hunter homages, actually. I haven’t actually read or seen it so I’m not sure what the extent of the homage is, but the spikey-haired kid is definitely familiar). Seeing the art-style suddenly shift into this early 90s kids anime look was pretty strange at first, but even stranger is how easily Baka fits into it. (stupid outfit and all)
This episode was a giant load of fun, though, and after not being able to watch Level E for a few weeks, reminded me why I fell in love with the show in the first place. It continues into episode 6, apparently….I can’t help wondering whether Yukiitaka has had both his apartment and show taken over by Baka’s trolling now.