Gaa sorry this took so long to get up, as everyone should know the episodes themselves were delayed and then they came out while I was away, and then I didn’t get to actually see them until yesterday. Note that, although these are two separate episodes, they aired as an hour-long special finale so I will review it as such. Also, and it should be obvious, this is a post filled with spoilers so don’t even read it if you don’t want that. It’s also filled with gushing.

Now having realized about Homura’s time-traveling Kyuubey tells her that every time she resets, she’s actually deepening Madoka’s fate. As for Madoka herself, after Sayaka’s funeral she is sinking further and further into despair, something that the emotion-challenged Kyuubey still can’t understand. He shares with her the history of mankind and the Incubators, revealing that every major achievement humanity has ever gone through has been thanks to a magical girl who eventually turned into a witch; from Jeanne d’arc to whom I presume is Cleopatra. In fact, so great is the extent of this influence that had the Incubators never come to earth to harvest energy, mankind never would have moved out of caves. Such sacrifices are, thus, for the benefit of the human race but Madoka is still unable to see anything to do with it as something positive. When Walpurgisnacht finaly comes to town, it brings with it a huge storm that causes most of the city’s people to seek shelter in a large hall.
Homura is the only Puella Magi left to fight it, and, like every other timeline she’s been in, she cannot do it. Just as she is about to lose hope, Madoka appears, now determined to make the contract with Kyuubey once and for all and become a magical girl, by using the ultimate wish.
Madoka wishes for every witch in every point of time, past and present and future, throughout history, to be destroyed by her hand, and in doing so changes the laws of time, space and history itself. Every magical girl there has ever been now no longer died in grief, and the grief seeds themselves no longer exist. Madoka ultimately outsmarts Kyuubey and even changes how the whole Puella Magi thing works….but at the price of her ceasing to exist as a human.
And then I cried forever.

Right. Wow. I don’t know about you, but I’ve officially put down Puella Magi Madoka Magica as one of the best anime I’ve ever seen, and it’s certainly one I am never going to forget. Since this post is pretty late, basically everyone else has already waxed lyrical about this amazing ending to an amazing series so I don’t want to just sound like more of the same. But suffice to say, whilst the other episodes were becoming more and more emotional, none of that could match the amount of emotional impact of these last two (and of course, especially episode 12.) Episode 11 again dwells on the extent of Homura’s devotion and the anguish she must feel over having to see Madoka die over and over, and yet to the current time-line Madoka, she’s only a distant transfer student who knows a lot. As for Madoka, we’ve watched her through the whole series as a girl falling further into despair and self-loathing, that to see her just stand up all “right, enough of this shit” was really something.
I knew that Madoka’s wish would be something that could negate any ill-effects on her and Homura, but I never really knew exactly what she could wish for. What she did was not only amazingly selfless and beautiful, but really shows how smart she’s become. Learning about all the magical girls throughout history (Jeanne d’arc Jeanne d’arc any anime that mentions Jeanne d’arc is amazing by default ok) and the bombshell of a revelation that Kyuubey and the Incubators have basically shaped mankind…and thus Madoka’s wish actually rewrites natural laws, makes this an absolutely amazing, unforgettable finale. (Plus seeing all those other magical girls from throughout time was quite a treat.)
And again, the emotions, oh God the emotions. Anyway who wasn’t moved from Madoka’s sacrifice and Homura’s anguish of her efforts being in ‘vain’ must be an Incubator themselves. These were some truly heartbreaking scenes, combined with a beautiful gentleness. Madoka just seems so natural as a ‘goddess’, or as Kyuubey put it, ‘force of nature’. I’m glad that Madoka still ‘exists’, if not as a human that anybody save for Homura remembers (saddest thing ever saddest thing ever ffuuuuu) and I’m glad there was a bittersweet ending rather than a depressing one.  What’s interesting is how after Madoka’s sacrifice a Puella Magi’s job is fighting demons rather than witches (since witches and grief seeds no longer exist and even Kyuubey’s become more benevolent), whether this will have anything to do with the rumoured (manga only?) sequel will be interesting to find out.

Final Thoughts
This was an amazing show. I’m not saying that because it’s the show that’s really hyped right now that everyone is apparently supposed to like, or because it’s ‘cool’ to like it. (I know Madoka’s getting a bit of hype-backlash right now from the hipsters who don’t want to watch anything popular, and the people who can’t see past the moe character designs, and even, amusingly, butthurt anti-SHAFT Gainax fans) I’m saying it because it really was an amazing show in every sense of the word. I honestly can’t remember the last time any anime has kept me in that much suspense, thrown me that many agonizing cliffhangers, that many amazing theory-crushing revelations, that many surprises, and that much anticipation for the next episode. I’ve never seen an anime so thoroughly and mercilessly crush my expectations (and in a good way). Many fans got into this show after they heard there was more to it than meets the eye and that shit got real in episode 3, so I imagine the experience was different for those going in knowing to expect some craziness. For me, who saw two episodes of cuteness first and then complained about the pacing, the unexpectedness of episode 3 stunned me and that’s when I, like many other people, realized this was the anime of that season, and of 2011 most likely. And now, seeing the series in its entirety, I can see just how perfectly crafted it is. And since I couldnt find any way to really segue into talking about how god-tier the music is…well, it is, and it really goes amazingly with the show.
Of course it has flaws too. I personally love the art style and the contrast it gives, but it turns a lot of people off. I adore SHAFT’s visual flair and the fight scenes with the witches are absolutely gorgeous, but some find them to be too artsy-fartsy or pretentious. The only really main flaw in my opinion is that the animation was not always top-notch, there’s quite a lot of off-model caps evidence of low-budget here and there, but it seems like this is all being fixed for the DVD/Blu-ray.
In all, this series was beautiful, frightening, thrilling and, at the end, awe-inspiring. And I know nearly every other anime blog has posted this cap at the end of their reviews, but there’s no way I can’t. 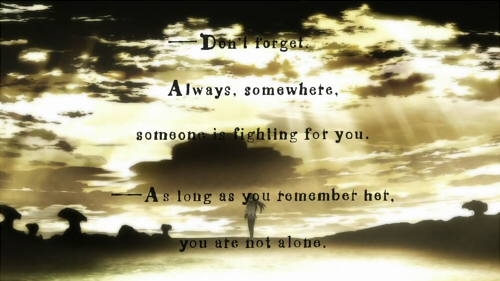