Exams are finaly over for the highschoolers and to celebrate they all decide to head to one of the nearby larger towns where they are much more things to do. Hinata is unable to, as she has made it to the archery finals and needs to practice. The gang minus Hinata (and Ayumu, who has apparently made friends at his own school now) have fun in the town, and once the date of the Archery Finals comes around everyone goes to see her and cheer her on. Unfortunately, Hinata makes a mistake and runs away, and as Harem Lead it is Kazuma’s job to comfort her.

I CAN’T STAND UI YOU HAVE NO IDEA. She is so uncute that it’s almost fascinating in a way to watch just how obvious it is that she’s meant to be adorable waifu-material when she’s just…not. That freaking voice, man. I love moe voices but honestly speaking like a mentally challenged 5-year-old is not remotely cute. I seriously cringe every time she opens her mouth, she truly represents the epitome of awful eroge characters.
As for voices that aren’t awful, I really love Sakai’s, and it’s probably the only vocal performance in this show that really stands out to me (besides Ayumu for being adorable and Daigo for being lol, and maybe the dorm mistress too.)
There really wasn’t much to this episode – the idea of every going to have fun was kind of nice and made me feel nostalgic for the game centres in Japan, as well as the karaoke centres (with the food you can order!) but it just wasn’t all that riveting really. Also I’m starting to really dislike Madoka because she’s basically nothing but a walking pair of boobs right now. She seems to have had a personality, but the production staff obviously don’t care about that because whenever she appears it’s all “HEY LOOK WHEN SHE MOVES AROUND SO DO HER BOOBS HYUK HYUK HYUK” and it’s just….8|. I wouldn’t mind more of her if they can actually give her something else to do.
The attempt to add some depth to the 2dimensional tsundere Hinata actually came across as less forced than I anticipated, surprisingly. Although she’s still not that great a character to me, I do like her more than I did in the beginning.
Next episode preview seemed to have Kazuma groping Ayumu’s littleboy chest, welp, stay classy Hoshizora. (It also seems to be The Beach Episode, another episode that must be included otherwise the creator’s face arrest, so I’m sure it’ll be full of more ridiculous fanservice besides shotachests as well) 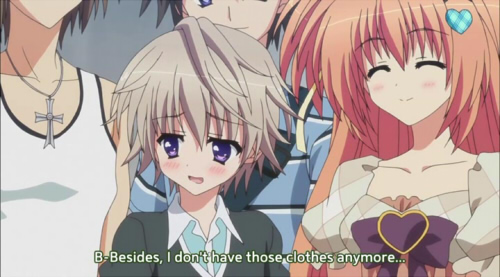 hngh hngh Ayumu. Kinda lol that of all people Daigo has a crucifix.