Hey remember when I posted here? Here’s another overdue nendoroid review.
Since I work full-time now (and try to devote any free time to my webcomic – by the way the character poll is closing soon so I’d vote now if you haven’t done so yet hinthint), I can’t say for sure how many (if any) series I’ll be taking on next anime season but I hope I can do at least one. I’ve currently got 4 other figures on preorder though so there will be  of course those reviews when they come out, at least. 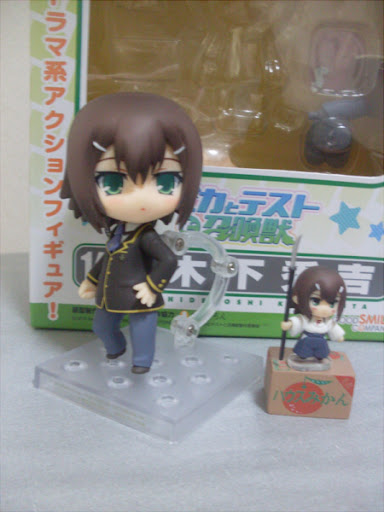 Ah, Baka to Test.  To tell the truth I havent had any time to see even a single episode of the new series but I hope I can soon (and I hope it doesn’t suffer from ‘season 2 syndrome’…) I still find it amusing that (so far) Hideyoshi is the only character to be nendoroidified. I mean he’s clearly the most popular, but I would have expected at least Himeji as well.

It’s probably not worth even pointing out anymore because this is the norm with current nendoroids, but Hideyoshi has the new stand with the swivel arm. What is worth mentioning is that, like with the HMO Miku, it’s got issues…it’s actually the complete opposite problem. Whilst Miku would fall off due to the stand’s peg barely going in, Hideyoshi falls off because it’s too loose. Siiigh. My next nendoroid is Baka Ouji from Level E so I’m hoping that I can actually have a ‘new stand’ nendoroid that works perfectly next time…

Compared to HMO Miku Hideyoshi is very cooperative and did not put me though hell for this photo-shoot. One of his arms (I think it was one of the kneeling arms) is a bit lose, however, but the main problem he has is the neck in his regular face. It’s too thick or something, because it very easily gets stuck inside the hole in his body. When I wanted to change his faces from the normal face, it was very hard to actually get this face out and I eventually had to use tweezers, all the  while terrified I was going to snap his neck (it’s happened before with a different, albeit older nendoroid). The other faces necks are all fine though and go in and out of his body without any problems. Anyway, time to take a closer look at the optional parts.

Here we have him with one of his optional faces (the oft-obligatory comical face), the zabuton, his sitting legs, sitting arms and the mikan box. This is to recreate the incredibly low-budget Class F’s desk and chair, which Hideyoshi is clearly not pleased about.  Including these things is pretty adorable but Good Smile made one huge misjudgement with the zabuton/his sitting legs, and that is the assumption that he would be able to sit perfectly on it. He doesn’t. Even now, despite how light their overall weight has become, nendoroids heads are still the heaviest part of their bodies and Hideyoshi topples easily if you try to sit him with the kneeling legs. I blue-tac’d him to the zabuton, but he still keels over. The only way to get him to sit on his own is to bend his head down like I have in the above photo in order to balance the weight. It’s a shame, and, going by the photos on the box, somewhat false advertising that he can’t actually sit like that on his own. If you want him to, you have to use the stand’s arm like so.

In that photo I’ve demonstrated that the stand can hold him okay even when you bend his head back the other way as far as it will go. It just doesn’t look as nice in a photo with the stand sticking out of his back like that. Anyway, there’s something else weird about his kneeling legs; they have some kind of slit on them that I can’t figure out the purpose of. I thought it was for the edge of his jacket which would get in the way otherwise, but it doesn’t seem to be….

I thought it might also be a slot for the sketch-board thing to fit nicely into but…this  doesnt seem to be the case either. For now it’s a mystery…a mystery that makes his sitting legs look less attractive than they should. Because of this and the hassle just to get him to sit, I don’t display him like that. Good Smile’s upcoming Meiko nendoroid also features legs for her to sit on the floor so I hope they work better than these ones.
Speaking of the sketch-board thing…

Now you can recreate that moment when Class F gets even more low-budget by down-grading from orange boxes to these boards to use in place of desks. It’s harder than it looks in the picture to get Hideyoshi to hold it right, and since that’s actual string used and not just plastic, it doesn’t look good unless it’s taught rather than hanging slack (which is what happens when he doesn’t hold it properly). It’s a cute extra, but not one I particularly care for.

Seguing nicely into his angry face there, that’s mainly for use with his fighting pose and to display him sending out his Summon. I kind of wish he had someone to actually be fighting but since he’s the only BakaTest nendoroid for now he’ll have to make do with threatening my Prince Baka once he arrives. To do that fighting pose, you use his optional open hand. Strangely, he is one of the only nendoroids I know of that only have a single open hand. I wish he came with at least two as all his other hands are clenched. (You can also use the open hand with the bent arm for him to strike that sassy hand-on-hip-with-bent-leg pose I have in the first photo, which is how I usually display him.)

So, the summon. It’s tiny, smaller than a nendoroid petit, and doesn’t have much in the way of articulation (the hand clutching the spear can swivel, as can its head) but it’s definitely adorable, and certainly the best extra Hideyoshi comes with. The detail may look lower in comparison to Hideyoshi but seeing as it’s so tiny, that’s just fine. It attached to that tiny stand with a small peg – which surprised me because I was expecting it to have a puchi nendoroid stand like Chiaki’s teddy-bear.

Anyway, possibly the biggest appeal to the Hideyoshi nendoroid is the fact that it’s Hideyoshi, who is known for being anime’s most delicious trap (yeah, fight me.) The nendoroid does not come with anything to show this (although I think coming with his chinese dress or maid dress would have been a nice touch and more welcome than the sitting pose/sketchboard) but if you have other female, flat-chested nendoroids the fun never ends. Stay tuned for the special bonus section to this review at the end featuring photos courtesy of my friend who not only has more nendoroids, but is a far better photographer. 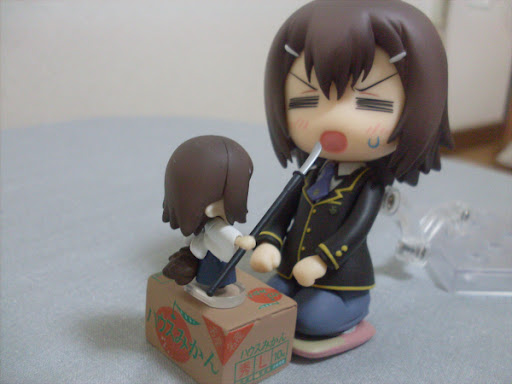 Hideyoshi is one of those nendoroids that I feel has its worth decided by how much you like the character. I like Hideyoshi, so I like this nendoroid, even with the flaws I’ve discussed. He looks good and the extras are cute (especially the Summon), but I think fans would appreciate showcasing his trapness a little more – even if they had only made one of his optional faces the embarassed face he usually has when cross-dressing. Even if it’s one this genderly ambiguous it’s also always nice to have more male nendoroids, which there is a definite shortage of! I’m fine with just Hideyoshi on his own but it would be nice if they released more BakaTest characters, since they’d look adorable put into one of those classroom nendoroid playsets.
Out of 5,

And so, as promised, it’s time for Hideyoshi Cosplay Time.

(I’m disappointed I didn’t I take a photo of Hideyoshi with Kagamine Rin’s body, and seeing how she’s in Australia while I’m in Japan that’s not quite possible now, but oh well). See you next time for fun with Baka-Ouji….or the next anime season, whichever comes first.