My figure reviews always end up really belated, but at least this one isn’t as late as the HMO Miku was!

Good Smile seems to have a penchant for nendoroid-afying the JUMP characters you least expect, but as adorable as those Bakuman and Neuro ones were, this is the first I’ve been compelled to buy, because I love Baka Ouji just that much. /Ouji/Prince/whatever you want to refer to him as.
It is kind of amusing comparing nendoroid Prince to original manga Prince, because he’s nigh unrecognizable when cutesified to this extent…although there’s really no other way they could have done it. He looks adorable anyway, and comes wearing the clothes he wears in the opening as well as a lot of the time he was with Yukitaka. Which, of course, only makes up a small percentage of the total series, but it’s probably his most recognizable outfit. …Except for the fact that in the anime, his hair was usually in a ponytail and he also had a hat and sunglasses whenever he wore this, which are absent in this nendoroid.

As you can see he does come with quite a decent amount of other parts, and some of them are really really nifty. Anyway, if you remember my last two nendoroid reviews (HMO Miku and Hideyoshi), I devoted a little bit of time in each bitching about problems with the stand. I was hoping that Baka was actually going to get this right and that I would finally have a perfect nendoroid. The result….?
Yes! Baka Ouji has a stand with a peg that fits perfectly – tight enough for it to not come out, and not tight enough to get stuck there. This should be regulation for every nendoroid so it’s pretty sad that I have to include this as such a fantastic Good Point for this one, but I was very happy. The peg itself is a little different:

It has a curved tip, because it needs to fit up under his hair to get into his back. Of course it’s easier to do this if you take his head off first, but if you do it right, once it’s in he’s not going anywhere.

The stand actually supports him so well that you can make him levitate without the whole thing toppling. Something which would be much more welcome with a figure like HMO Miku, sigh. He can actually get pretty high too!

Starting with the optional faces, there’s firstly what may look like an annoyed face but is actually meant to be his ‘thinking’ face. As in, thinking of ingenius, terrible methods of trolling everyone. It does go well with other intentions too though. I kind of wish there had been some kind of option for his troll-face, because with this, his plain face and his ‘cute face’, I can’t help thinking that people who haven’t seen or read Level E are going to get a hilariously inaccurate idea of his personality. Maybe an optional body with that wtf outfit he had in the Colour Rangers arc.
Of course, he also has numerous types of arms to enhance these poses.

Yes, he also comes with the cat, which is my personal favourite of the extras. Plus the optional arms to hold it. (him? her? I don’t think the cat’s gender was ever revealed. I don’t remember if it even had a name, actually). I really like when nendoroids come with cute things like this, but it really is best when they can actually hold them! Which brings me to the next face.

This is the face he made in episode 3 when Kraft, Yukitaka and co read his diary and revealed his first trolltastic plan. (“You peeked? How cruel!”) If you’re into Majin Tantei Nougami Neuro, it’s kind of similar to how Neuro did that fake cutesy face with ‘I can’t go?’ In other words, the fakeness was part of the joke, although to the unitiated it looks like an embarrassed blushing face. (again, giving the most hilariously inaccurate view of The Prince of Trolling to those who don’t know). I really like that they included this face  though, as you can use it anyway you want. Whether it’s the intended ‘fake surprise’ face (complete with the optional hands to cup his face):

The book is also a feature I like. It goes with the coffee cup and the swivel chair to, as the box says, ‘recreate the scene where he and Yukitaka first meet’. (The problem of course being that when they first met Baka was actually wearing Yukitaka’s clothes, but whatever. Including the swivel chair I think is really, really awesome.)
He has a hole in the knee of his optional sitting legs to rest the coffee cup on, which has a peg on the bottom. It’s neat, but it means that if you ever want him to sit without the cup there’s an unsightly hole there. After the Hideyoshi nendoroid, which refused to stay upright on the cushion, I was really worried that Baka was not going to sit on the chair properly at all and fall over. But it’s very sturdy and if you display him like this, you don’t even need the stand to keep him upright.

In all, Prince Baka is a very well done nendoroid release, troll face or no troll face. He’s easy to work with, rarely if ever falls over and is all over very well-made. The cat and swivel-chair extras are also really nice.  Plus he’s likely the only figure the entire Level E series is ever going to have (as awesome as a Kraft nendoroid would be…) I was a little on the fence about getting him at first, but after he arrived I’m glad I did!
Out of 5, 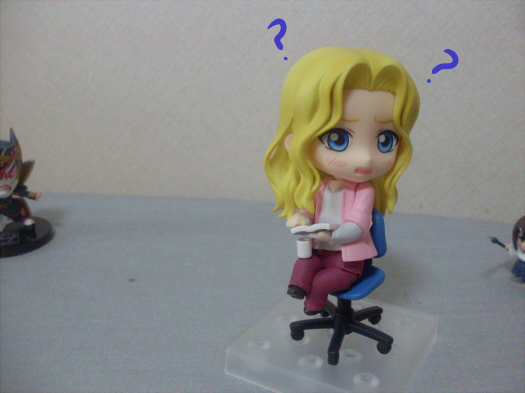