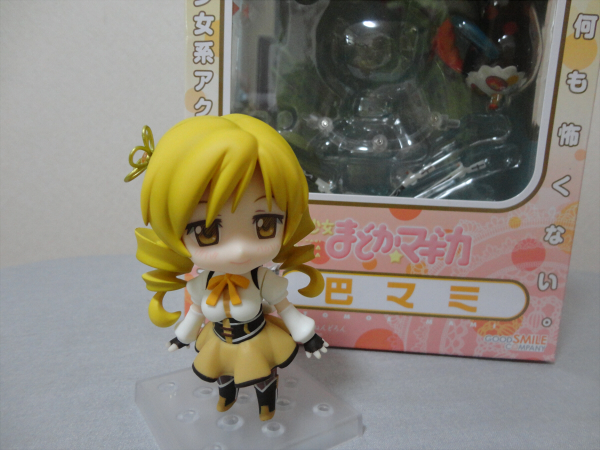 Continuing in my tradition of doing figure reviews months after they actually come out. Let’s see if I can get this done before the figma reaches me! This does contain what is basically spoilers of episode 3 of Madoka Magica but really, if you don’t at least know about the events in the episode I can only assume you live under some kind of internet rock and thus probably wouldnt be that interested in this review anyway.
The flood of Madoka figures didn’t happen until the anime was well over, but it was definitely worth the wait. While all the characters have great designs, Mami’s is still my personal favourite so she’s the one I wanted a figure of the most. (And due to my attempt at limiting my figure buying from now on, the only one.) 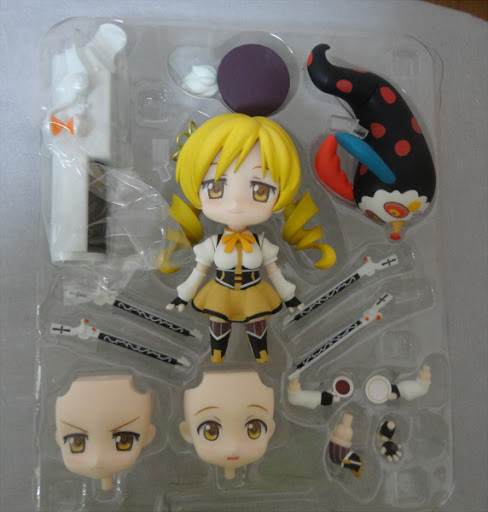 Nowadays nendoroids come with so many extras that it’s now more unusual for it to not have a huge load  of optional parts, so Mami’s load of extras is mostly standard. I do feel that she probably has at least a little more than  the rest of the girls, due to her inclusion of a special friend.

As you can see, Mami looks stunning. This is without a doubt the best looking nendoroid I’ve ever owned. All the right details are there, and sculpted so beautifully, hell she’s even  got her renowned…mami-mammies. Speaking of which, there’s actually a joint around there where they join to the torso, so that she can swivel her upper body. Unlike the horrendous joint on the HMO Miku that drove me insane, it’s incredibly sturdy (I actually don’t know if it’s possible to detach her upper torso from her lower torso, I haven’t tried, and if it is that just shows how sturdy it is). 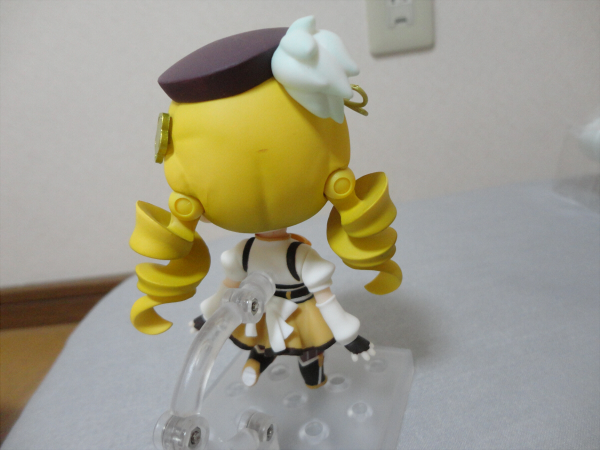 Yes her drill-tails are moveable, and the consequence of them looking perfect from the front means the joints really stand out at the back, but that’s hardly an issue. One thing I have a slight issue with is her hat. It isn’t actually attached to her in any way, which is unusual for nendoroids as they usually always have pegs and things to keep hats in place. Curiously, there is a peg-hole for where she can hold her hat, but on her head it just balances. It does balance well, but still, it tends to fall off if she gets bumped.
I should also mention the stand of course – and question why Good Smile are so damn inconsistent with these things. Even though Meiko and Baka had really good ones, Mami is once again cursed with a loose-fitting one that doesn’t hold her as well as it should and comes out of her back too easily. It’s better than HMO Miku’s, but still. Can’t you sort this out, Good Smile? Really.

Mami has optional bent arms as well as optional hands that hold her tea-cup and saucer, so you can let her relax. It is slightly annoying that she doesn’t seem to hold the cup directly above the saucer, but it’s a nice, cute extra that gives the figure more personality.

If combat Mami is more your thing, you can swap her pleasant face for her business face and display her with her weaponry. First up, her vast collection of muskets she can summon up from nowhere. Remember those really cool scenes where she had them appear around her in the anime? Each of the four muskets that come with this figure has its own little holder thing that fits into the stand for you to place them around her.

It looks pretty cool, but sadly Mami can’t actually hold any of the muskets. This is okay, however, because there is a gun she can hold.

Yep, it’s ‘Tiro Finale’, Mami’s obscenely big final move gun. Including it is really cool, and I like that it has its own stand-arm thing to help Mami hold it (even though it is really light she wouldn’t manage to without it)and yet I’m kind of…disappointed in it to be honest. It looks pretty plain, and it really ought to look better that. It actually looks ‘unfinished’, even. It makes for some badass poses, but I really think Good Smile could have made it look as cool as it did in the anime; they usually have no problems doing this.

So, it really is a relief that Mami’s other notable extra fares much better. As previously mentioned, Mami gets a ‘special friend’, the ‘SURPRISE’ form of Dessert Witch Charlotte. She also comes with her own stand-arm thing.

I’m really, really happy about Charlotte being included! She’s my favourite Witch, and she just has such a strikingly awesome design that it works great in figure form. (The only thing being of course that anime-Charlotte appears much longer than this and in fact we never see her tail, if she has one, at all, but anyway). She looks really great displayed with Mami even though she’s nowhere near to scale. And of course, if Charlotte is included, so too is the appropriate Mami expression.

And….okay. Sigh. Look, I know this has been done to death. I know every single other collection of photos of this nendoroid, review or otherwise, will do this. But it’s basically required so I’m just going to go ahead and do it.
You can go right ahead and recreate the whole scene.

Even though Tiro Finale could look better and the stand is still not quite right, this is an amazing nendoroid release that would probably get full marks alone for just how damn good it looks. However, it also comes with Charlotte, so that’s definite full marks from me. 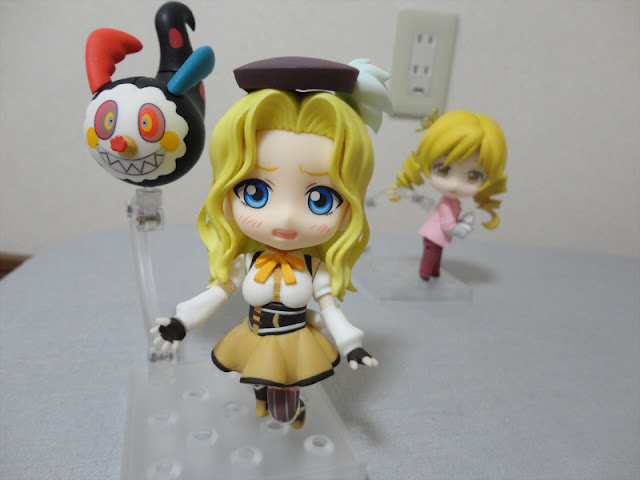