Alright, I’m safely back in Australia so its time to get a start on my own First Impressions! 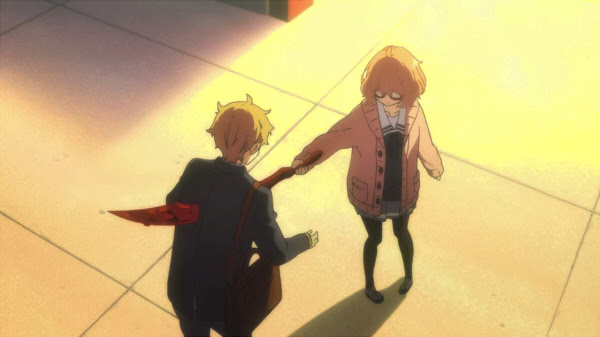 Amazingly, Akihito Kanbara is not an ordinary boy, even if he tries to pass as one. He’s actually immortal – his wounds heal by themselves because he’s half Youmu. Youmu, which seem to be invisible to everyday people, are apparently nasty beings hunted by what are referred to as Spirit World Warriors. These warriors are made up of several different clans, and one of them in particular, who use an odd kind of blood-manipulation magnet, are scorned by the others. Akihito meets the clumsy and cutesy Mirai Kuriyama, one of these blood-weilders, who, although not having any problems practising ‘killing’ Akihito’s immortal body, is too scared of Youmu to try fighting them alone…

What would Rika in Chuunibyou demo Koi ga shitai be like if her chuunibyou delusions and imagination battles actually happened? The answer wouldnt be far from Mirai Kuriyama. She’s not only cute as a button, but incredibly clumsy and tends to make cutesy noises when she trips, which is a lot. Basically, KyoAni are back to their bread and butter this season.
Kyoukai no Kanata is a very good-looking show, with a really nice muted colour palette and a highly memorable lead girl design. Chuunibyou must have been warm-up, because the supernatural battles that take place in this episode alone were quite impressive and I’d definitely like to see more of those. There’s some really gorgeous lighting effects, KyoAni’s usual attention to small cute gestures and the like, and I also found myself enjoying the background music quite a lot.
And yet….something didnt quite click with me. Maybe it’s because Mirai seems too much like Rika, maybe it’s because her cutesy clumsiness seemed too forced, as though KyoAni was yelling ‘Look, fanboys! We still do moe girls doing the moe things!’ really loudly. So far she’s just a clumsy cute girl with a catchphrase (‘that’s unpleasant’) and isn’t really doing much to make herself likeable (besides her lovely character design, anyway). Her behaviour towards Akihito is kind of selfish and borders on annoying. As for Akihito – well, it’s definitely great to have a ‘boy meets weird girl’ story where the boy is also abnormal in some way and not Mr Average Joe. The problem is that Akihito is, so far, the cynical sighing lead male character I can not stand in anime any more, so I desperately hope that there’s a lot more to him than this.  So far, the character that interests me the most is Mitsuki, a slightly snarky member of the literary club that Akihito is in.
It wasn’t the strongest first episode but it did leave me interested about the other magic clans and the overall story, and its so nice to look at that I’ll definitely be watching more. I hope it turns out to better than the first episode was; as it stands I don’t feel a strong desire to blog it but I’ll see whats in store in the second episode before I reach decision, as I’m optimistic about it all the same.

One thought on “A First Impression – Kyoukai no Kanata Episode 1”