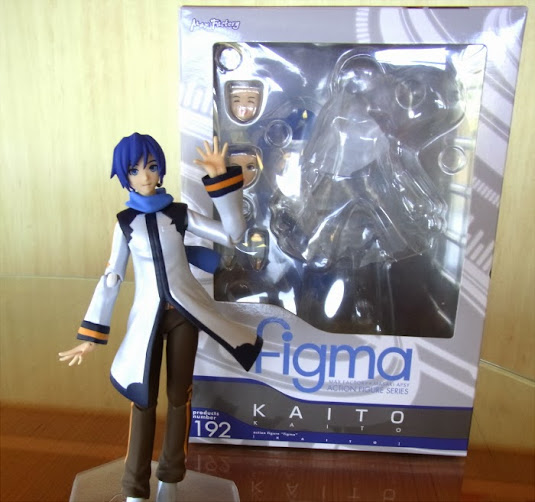 We’re over 2 months late with this review, so let’s get a move on shall we?
Kaito in figma form has got to be one of the most requested and anticipated male figures of all time. It got to the point where the inevitable announcement was the thing I mostly looked forward to when looking at the Wonderfest coverage, and was disappointed time and time again. But, at last it happened, the figma was made, and now after approximately four years of pining for its existence I finally have a poseable plastic Kaito on my desk.

One of the first things noted about him was that he went through a slight design change in the production phase – the first prototype of him shown was based on his appearance in the Project Diva games – meaning the blues were lighter, particularly the accents on his coat, and said coat was white with a very plasticy looking texture. The newer version, redone to match the colours of his nendoroid version, features darker blues and a pearly silver coat. I’m glad they decided to do this, because it really makes a better looking figure overall.
The next thing noted about him was that he was one of the first figmas to be hit by Max Factory’s price hike, and many complained about a lack of accessories that would justify the price. Kaito’s included accessories (minus the regulation collection of extra hand parts) are the following:

I personally don’t see much of a problem; he has more faces than most of the other Vocaloid figmas and the extra long scarf is really cool, as I’ll show later. Besides, there isn’t really anything else I can think of that a Kaito figma should come with.

Anyway, as much as I whined every Wonderfest that didn’t include a Kaito figma announcement, I can now say I’m glad that it took them this long to make him due to how good he looks. He’s easily the best-looking of the Vocaloid figmas next to the new Miku 2.0 (whom I will also review; mine is currently shipping). Design-wise, he’s perfect. The creases in his clothes are believable, he doesn’t have a speck of paint out-of-place, and all the accents on his coat are slightly raised which really does add a lot.

His default face is a sweet and gentle smile which goes great with a variety of poses. As for posing, he’s quite easy, but I feel that he definitely looks better with his arms bent than out straight (although, this goes for most figmas really). His coat is soft plastic and easily bendable, just like Luka’s skirt was. 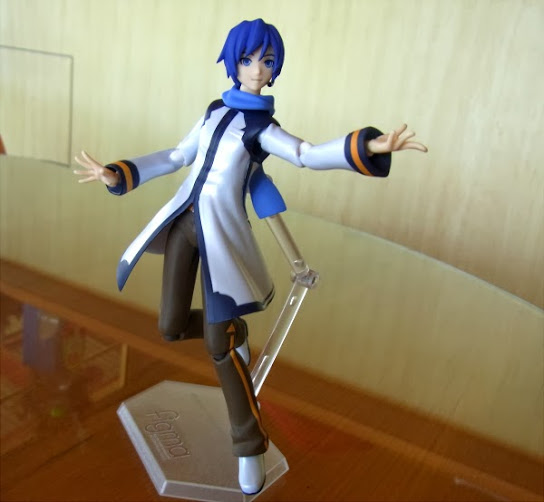 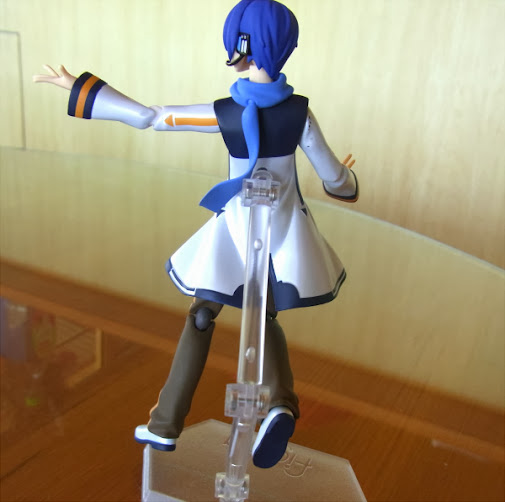 The joints in his knees look a bit unsightly from behind (although despite how they look in the photo they’re the same colour as his pants, just shinier).  Anyway, his poseable arms and glittering pearl coat bring me to the figures biggest downside – which might not potentially affect everyone although it’s worth pointing out. It seems that the paint scratches off a little too easily and I lost a bit of it near his shoulder when I moved the arm – luckily on the back of him and not the front. It’s annoying that this can happen, but it hasn’t happened anywhere else on his coat.
You can also see above that the fluttering part of his scarf connects to the part that goes around his neck with just a small hole; the fluttering part can be rotated around however you wish. If you want maximum fluttering, there’s the other longer scarf.

It’s stiff plastic but incredibly light, so it will hold any ‘pose’ you make it into just by moving it around on the little swivel part. It’s actually really damn cool and one of my favourite things about the figure, as it really makes for some dynamic looks and creates a great sense of movement.

Apparently the extra long scarf was meant to be in reference to Kaito’s V3 outfit; which is odd because Kaito is usually depicted with a longer scarf anyway. (except in Project Diva).

Up next is Kaito’s cutesy happy  face, which is very similar to the one that came with his nendoroid version. It’s adorable. One of his poses on the box seems to be referencing a famously happily-cynical Kaito ditty ‘Shineba ii no ni'(‘I wish they’d just die’), which made me chuckle although rather than try to recreate it I came up with my own poses.

It wouldn’t be a proper Kaito figure if it didn’t come with an ice-cream or ice-lolly, and so the figma comes with two. At first I wondered exactly why Kaito needs two, but if Miku got two leeks there isn’t really any reason why Kaito shouldn’t have two ice-lollies.

Which brings me to his last face. His expressions have been much the same as the nendoroid version until now; but whilst this face is similar to the ‘Urotander’ face the nendoroid had, this one is a lot cuter. Rather than looking humorously ‘manly’ as the nendoroid did with this face, figma Kaito is more adorably determined.

Apparently its meant to be a ‘powerful singing’ face, but to me it honestly looks more like a Kaito version of Zoolander’s Magnum, which is much better.

Depending on exactly how you interpret this face, it works really well with a lot of poses, too. Much like his other two faces. He really is the most expressive of all the Vocaloid figmas so far in my opinion (Miku 2.0 could challenge this; I’ll have to wait and see once she arrives.).

Anyway, he’s a great figure, his extras add a lot and he’s amazingly photogenic. He’s my current favourite figma and he was definitely well, well worth the wait it took for him to be made at all. I feel like I should knock some of his score off for the paint scratch he suffered…but in the end, he’s basically perfect anyway.  If you want him too, he’s still up on amiami, but only while stocks last.
Out of 5,

Lastly, some nonsense I made. 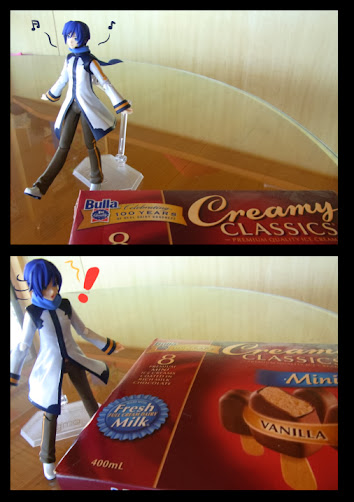 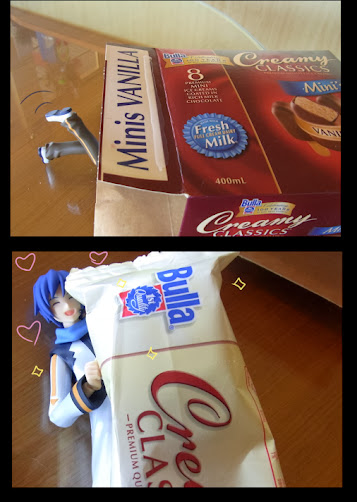 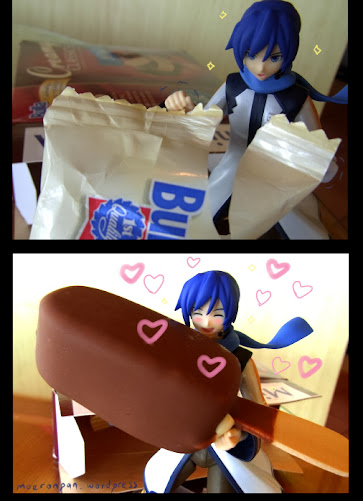