Hey blog readers, I’m having fun with Junko in the US right now so this is the last review you’re gonna see from me in a good while – I put up the skeleton of it before I left and have been adding to it whenever I have wifi. For some reason this process affected the quality of some of the photos, and I’ll hopefully be able to replace those at a later date.

Time for another doll review then – this time it’s the newest version of EX Cute Family’s Aoto – who is both Aika’s younger brother and Yuta’s best friend.

2015 marks the 10th anniversary of Azone’s Ex Cute line of dolls and to celebrate the occasion the brand’s 10th series has consisted of upgrades to selected dolls from the previous 9 series. While this doesn’t officially include the Ex Cute Family boys Yuta and Aoto in the lineup I think it’s pretty reasonable to assume that it’s the reason the Detective Team II versions exist. Unlike the Ex Cute girls, however, these new detective dolls look drastically different to the old ones – with not only new outfit designs but new hair and eye colours as well. For comparison, here’s the original Detective Boys Aoto from 2011.

I mentioned before that Aoto and Yuta have always been released together since Yuta first debuted (the original detective Yuta actually being the first Yuta doll), and also that it was a shame I didn’t have an Aoto to go with my own Clock Rabbit Yuta, considering that the two are meant to be buddies. Truth was I had actually just been waiting for a version of Aoto I liked enough to want to buy, and…here he is! I couldn’t resist him, and while there are some things I like better about the old versions of the detective boys I definitely prefer the new Aoto overall.

He comes with a fairly decent amount of bonuses, although perhaps less than the previous Yuta and Aika I reviewed. In the booklet he comes with there’s also of course another cute 4koma comic – unfortunately I didn’t have time to scanlate this one, but its a cute little story about the two trying to be detectives but failing to actually find a case (Aoto then gives up and decides to slack off in a food court where Yuta won’t find him, but runs into him anyway.) 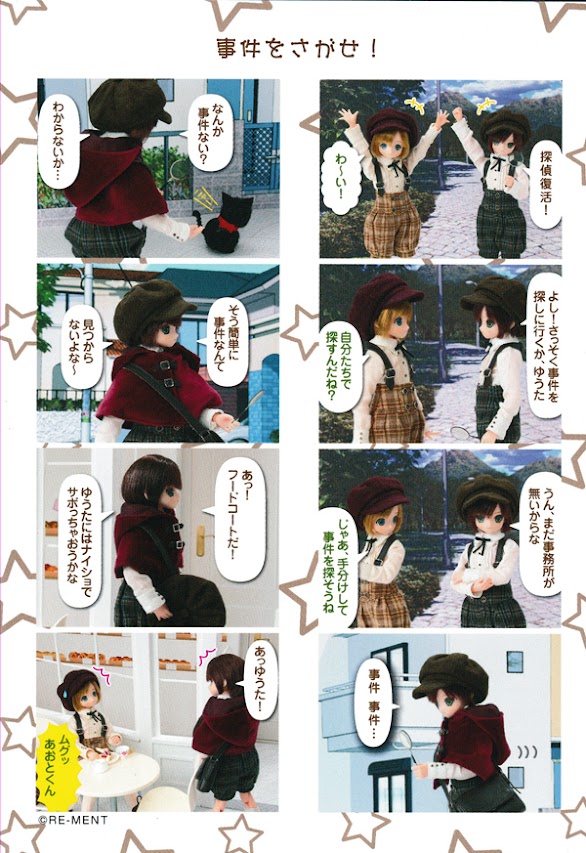 Aoto comes dressed in grey tartan overalls with poofy shorts, over a white shirt with a black ribbon. It’s a nice colour scheme and I really like the buttons.

The ‘interesting’ thing about the outfits for the Detective Team II dolls is that although they are technically new, they’re basically ‘recycled’ from existing Azone outfits. The overalls and undershirt are the same as a set I bought last year except for having poofy shorts attached instead of a skirt, and the cape he comes with is also the exact same item Azone were already selling separately.  I can understand why some people apparently found this disappointing, but I personally really like the outfit and don’t really care. (It also makes me wish I owned one of the skirt versions in this colour so that Aoto and Aika – his sister in Azone canon – could match.

The overalls themselves are made of a very soft material while the straps are fake leather. The overall look is, at least according to the official description for this doll, meant to evoke 19th century England…maybe not entirely accurate but cute nonetheless.

You may have noticed that Aoto’s socks are baggy and his boots almost comically large – and there’s a reason. Just like the original Detective Boys, the new ones are wearing ‘Papa’s boots’, apparently to give them courage. (Not that we know exactly who Aoto or Yuta’s fathers are but they apparently both wear the same boots). They’re made of fake leather with foam bottoms and the size of them makes it easier for him to stand on his own without a stand. (Again, the dolls don’t come with stands and I tend to use the cheap obitsu ones easily found on sites like AmiAmi.)

He has Aoto’s typically mischievous face, although I’m pretty sure this is the first time he’s been given blushing on his cheeks. It really adds to his face and makes him look much cuter so I’m glad for this detail and only wish Azone had started adding it to their boys earlier.
I absolutely love his emerald-green eyes (the first time Aoto has had this colour I believe) and they were a huge part of the reason I ended up buying him. They also go nicely with his hair, a slight reddish-brown (Chestnut Brown according to Azone). I also really like the contrast his sharper features have with Yuta’s softer ones.

As usual for the XS boys, and unfortunately, Aoto only comes with two sets of hands (natural and outstretched aka jazz hands) and you’d need to buy one of the XS hand packs sold separately if you wanted to give him a better range. I do own one of those, but I still find it annoying….especially considering that the XS sizes anime character dolls come with at least 5 pairs. But anyway, it’s really worth getting the other hands if you want to pose him a lot because I think that they really help to bring out Aoto’s personality, which I feel like he has a lot of.

That hat is notably different to the original, being all the same material instead of having a fake leather brim, and I honestly can’t decide which I prefer. I do really like this one though (and not just because I’ve since given it to my Melbourne doll as it’s finally a hat that suits him) and as you can see it’s quite large, but it actually helps balance out the largeness of his boots

He also comes with a fake leather bag that can hang over his shoulder. It’s pretty simple, but it suits his colour scheme. It has a button under the flap so it can open and close, so you can even put small things inside, such as…

The magnifying glass is a cute extra, although it does feel a bit too flimsy. It’s made of some kind of thin metal and has a plastic lens in it. Because it’s so thin, I get a bit worried about it bending…but the bag actually does keep it pretty safe.

The handle of it can slot quite neatly between the fingers of one of his ‘natural’ hands. Then Aoto can use it to solve all kinds of mysteries.

The last extra is probably my favourite – the cape! It’s a nice wine red colour and the buckles are cute, plus it’s made of a nice velvety fabric. Again, Azone did already release this item separately as part of the Komorebi Mori clothing line – to be honest I was never that interested in it before but after seeing it in person I’m really glad to have it. It looks pretty cute on him, and brings a slight air of sophistication to his outdoor detectiving.

…also, it has a hood! I’ll never understand now why Azone have no official pictures of any dolls wearing these capes with the hood on because look how cute if is.

I guess he looks less like a detective with the hood on, but who cares really.

As usual, it’s time to strip him down to dress him up in other Azone clothes I own. If you take off the overalls, you can see his beige bloomers, the last part of his outfit.

Time for the Aoto fashion show!

I’m very happy with this Aoto and the more I played around with him for this review the more I grew to love the overall look he has and the contrast with my other dolls. He does come with less than the previous Yuta and Aika I reviewed and some of his clothing is ‘recycled’, but all that means is that he doesn’t get a perfect score – he’s adorable, and the first Aoto colour variant I’ve truly liked.
Out of 5,

If you want a mini detective of your own, he’s likely still in stock on most online hobby stores like AmiAmi, HLJ or HobbySearch since neither he or the accompanying Yuta were that popular when compared to other Azone dolls. However, that’s only at the time of writing this review and it’s likely that, as usual, once he sells out his price will go up with his scarcity.