Kuroo wakes up handcuffed to a bed to find he has been abducted by a slick, shady guy named Tachiiri. Kuroo is revealed to be among a group of captives (which also includes Yabu), all of whom are in debt to Tachiiri. Kuroo’s own debt totals several million yen. However, it’s not money that their creepy collector wants…but a human heart.

The results of the medical examinations come back, with Kuroo and another man named Raymond being marked as potential donors for this mysterious heart transplant. Kuroo questions who will perform the operation, as a successful live-donor heart transplant has yet to occur, with patients dying within months or even days. Tachiiri has lined up a mysterious black-market doctor named Joker. Meanwhile, Kuroo confronts the man who will receive the heart, Tamezou, and accuses him of “using money to purchase life”. In retaliation, Tamezou chooses Kuroo to be his heart donor.

However, the doctor “Joker” ultimately refuses to come, as he is still in hiding. Desperate to escape punishment by Tamezou’s assistants, Tachiiri arranges for Kuroo to perform the surgery instead, with Raymond as the donor. Raymond, an illegal immigrant with a dying daughter, is happy to sacrifice his heart, and Kuroo agrees to the deal. Internally, he muses that a heart transplant is similar to an act of God, and that he truly desires to perform one.

A desperate Yabu insists that Kuroo not perform the surgery, calling it murder. Amidst vague, scattered flashbacks, Kuroo insists that Raymond is willingly giving up his life and that he must perform the surgery for his sake as well. Yabu retaliates with stories of his own past as a war medic and states his own creed: that nobody truly wants to die, and they give up life only when they have no other option. Before Kuroo can make a decision, Raymond goes into cardiac arrest and dies. Following this, the operation is performed successfully….

…or so it seems. Actually, it was Tamezou who went into cardiac arrest, and Kuroo performed cosmetic surgery to alter Raymond’s appearance to look like Tamezou. With access to Tamezou’s money, Raymond can now save his daughter’s life. Kuroo sincerely thanks Yabu for helping him resist the temptation to perform a heart transplant, acknowledging that it would have made him a murderer.

I had a lot of mixed feelings about the episode, but my final reaction is a very positive one. Instead of focusing on a medical procedure like episode 1, episode 2 instead featured our protagonist facing a moral dilemma – whether he would perform a live donor heart transplant, which would label him both a medical genius and a murderer.

First, let’s start with the parts of the episode I didn’t like so much. It was never explained where this episode takes place in the timeline – is it before episode 1? After? How much later? We also didn’t get a lot of explanation as to who Tachiiri was and why Kuroo was in debt to him, though that might be something that gets touched on later. Another infuriatingly vague part of the episode was Tamezou, the wealthy old man seeking a heart donor. He was referred to as the leader of a “cult” or “sect” and had creepy near-identical follower/assistant people, but nothing about that was EVER explained. It just seemed like unnecessary and cluttering up the episode, and given how the episode ended, doesn’t seem like it will be brought up again.

However, this episode also did so many things right. It tricked me several times into thinking it was going to take the easy way out, but it never did. At first it seemed that Episode 2 would repeat Episode 1’s formula of “medical procedure with a strict time limit” but then it focused on the moral question instead. Said scenes of Kuroo questioning whether he could perform the transplant were beautifully rendered. Whereas in Episode 1, Kuroo performing surgery was represented by silver wires, seeming graceful and artistic, Episode 2 used thorny vines squeezing Kuroo’s body. It was a great way to represent the dangers and deep questions associated with medicine, in contrast to “medicine as life-saving” shown in Episode 1. Though the “God” figure Kuroo imagined when he compared heart transplants to acts of God was a bit strange looking (being a large black dog-like creature), I liked how it was portrayed as inhuman and spooky, creating a comparison with how other characters see Kuroo himself.

The second point when I was prepared to be disappointed with this episode was when it seemed that Raymond had died and that the operation had happened successfully. This would have been such a cheap way to resolve Kuroo’s quandary, and would have possibly turned me off further episodes of this series. However, instead there was a brilliant twist ending which utterly surprised me. Best of all, it did feature Kuroo making a definitive decision not to go through with the transplant, forsaking the hefty fee he would have received and saving the kind Raymond over the greedy Tamezou.

While this episode had a few flaws, its strong points definitely outweighed the weak. I love Young Black Jack’s continued willingness to be raw and ugly, both visually (the shirtless prisoners in this episode were far from attractive, and included many body types that are rarely shown unclothed in anime) and in terms of subject matter (again, Kuroo’s internal debate about the heart transplant was just stunning). Not to mention we got some backstory for Yabu, with hopefully some to come for Kuroo in later episodes. I eagerly await what Episode 3 will bring me, and hope for more exciting surprises. 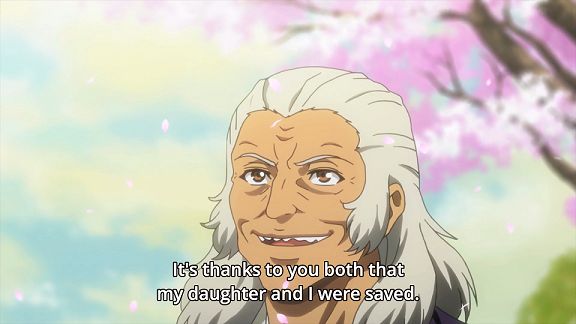 Sorry Raymond, you still look creepy even with the cherry blossoms