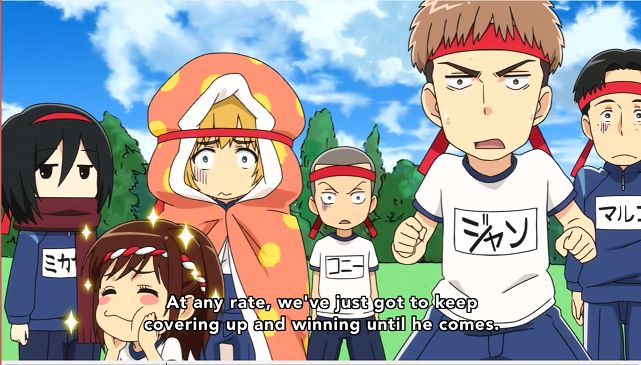 Episode 3 focuses on the cold and distant Annie Leonhardt. She seems to hate Eren for mysterious reasons, and is preparing to defeat him in the school dodgeball tournament. However, on the day of the tournament, Eren oversleeps and doesn’t show up. As Professor Shadis’s rule requires everyone to play, his absence would disqualify his team.

In the first match, the team consisting of Jean, Armin, Mikasa, Connie, Sasha and Marco faces a team of random extras. Despite the team being utterly terrible (Sasha eats the entire time, and Mikasa becomes depressed without Eren) they manage to win. Meanwhile, the team of Annie, Reiner, Bertholdt, Ymir and Christa wins with ease.

Eren manages to show up just before the climactic match. Annie repeatedly hits Eren, but Mikasa saves him by catching the ball each time. Soon, Eren, Mikasa, and Annie are the only three remaining. Eren demands to know why Annie hates him so much, and she reveals the answer: she’s upset because she has the same favorite food as Eren (cheese hamburgers) but feels she can’t tell anyone because Eren is constantly teased for it. Eren suggests that they eat cheese hamburgers together, which Annie accepts, ending their rivalry. Eren’s team also wins the game when a stray shot from Connie, who was practicing on the sidelines the entire time, accidentally hits Annie.

Overall, this was a much stronger episode than the previous two. This show is still nothing amazing, but this episode had more of what I had been hoping to see: the characters in original, humorous situations instead of following the plot exactly. Though I’m not usually a fan of “big sports game” plots, this one was amusing because the actual dodgeball scenes were brief and focused more on the characters failing at the game.

The over-exaggerated quirks were also less annoying, because they were used in a funny way: to illustrate exactly why each character would be bad at dodgeball. (Sasha eats ramen in the middle of the game, Mikasa gets a scary/sad aura when Eren’s not around, Ymir only cares about protecting Christa, etc.) It’s especially nice to see Mikasa, who is one of the characters taken more seriously in the show, be a source of humor here. I even laughed a few times, mostly at Sasha’s dodging while eating ramen and Armin with his team headband tied around his futon.

The references to the original show were also toned down and appeared more as small “wink wink” moments for fans without taking away from the rest of the episode. Especially funny were Jean dressing up as Eren (from a scene way later in the manga that hasn’t even made its way into anime form yet) and one of the show’s epic music tracks, Reluctant Heroes, showing up during the dodgeball match. My hands down favorite, though, was one of Annie’s famous lines to Eren (“Shall I teach you that technique?”) being used in a new situation with a new response (in the original anime it’s a fighting technique and he accepts, here it’s hitting someone way too hard with a dodgeball and he says “why would I want to learn something so painful”).

I think a major reason why this episode was so strong is that it had nothing at all to do with Titans. The scenario was entirely contained within the school setting and only featured the kid characters. Call me strange, but I really think the generic “middle school AU” setting works better than “middle school but they still fight Titans”.

My one complaint about this episode is that I really don’t understand what seems to be one of the show’s major jokes: Eren and Annie’s love of cheese hamburgers, and the fact that they get teased about this. Eren is referred to as “chee-burg bastard” and Annie doesn’t want anyone to know about it secretly being her favorite food. Is there something wrong with cheese hamburgers? Do they have some kind of bad reputation in Japan? I live here and I’ve never heard of anything like that…guess this one joke will just keep going over my head.

Other than that, though, it was a really solid episode and I hope it is a sign of continuing improvement for this show. Out of 5 Dios: 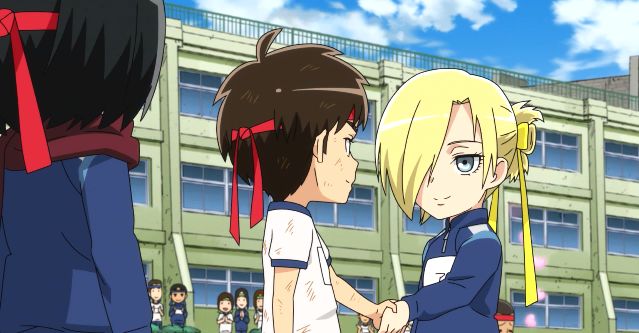 I had to cap Annie since this was basically her episode