It’s the first day of club activities, and Eren and his friends are curious about the mysterious “Wall Cleaning Club” they’ve been drafted into. President and only member Rico Brzenska dashes their hopes for an exciting club when she reveals that….shocker of shockers…the Wall Cleaning Club is responsible for cleaning the schools.

The group miserably cleans the windows. A slacking Jean is caught and punished by a 3D Manuever Gear wearing Rico. Yes, in this universe, the 3DMG is a cleaning tool. The gear causes the first years to gain interest in the club at last, and they clean the windows quickly. Rico decides to allow everyone to start training to wear the gear as a result of their excellent performance.

As in the original show, everyone except Eren easily masters the 3DMG, while Eren flounders helplessly. Rico declares Eren to be weak, and forces him to leave the club. Club advisor Janitor Hannes sees Eren sulking and tries to give him a demonstration, but crashes into the wall. Again as in the original, it turns out that Eren’s gear is merely broken (though it didn’t help that Hannes was drunk while using it). Using a normal set of gear, Eren is perfectly skilled and easily able to stay in the Wall Cleanup Club. Unfortunately, his celebration is cut short when the Titans show up to graffiti the wall. Eren is unable to defeat them, and the club’s efforts are ruined.

Did….did…did Shingeki Kyojin Chuugakkou just improve on something from the original show? Well, as Rico says in this episode, “I’ll stand on my hands and eat spaghetti out of my nose, because the impossible has happened”. Episode 4 tackles another iconic scene, the team’s first encounter with the iconic 3D Manuever Gear. While the overall plot is the same (the others are skilled while Eren flounders, until it’s revealed that Eren’s gear is broken) the scenes are made more amusing by the addition of Rico and Hannes. Rico was a minor but surprisingly popular character in the original, and here she gets to shine as the passionate, devoted president of the Wall Cleaning Club. I like her character, significantly more so than Shadis or this show’s version of Levi, so I hope to see more of her. I wonder if she and Levi will get along due to a shared love of cleaning? Hannes as the drunken janitor using the broken gear despite Rico’s warnings also brought me quite a few laughs. 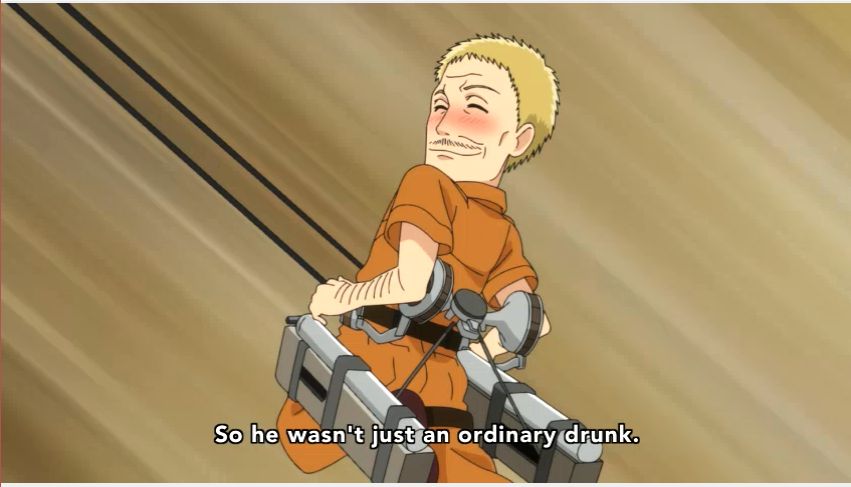 We also see Eren’s obsession with defeating Titans portrayed as ridiculous and overzealous, compared to the other characters who are annoyed by the wall being graffitied but equally annoyed with Eren’s antics. Eren’s reactions to everything are so huge and overblown, they can get a bit annoying sometimes, so I’m glad the other characters are serving as suitable foils. The Titans here really are mostly goofy bullies who don’t seem to understand how big they are in comparison to the humans, so I’m glad we don’t have every character shouting about wanting to defeat them. The school-focused scenes are still funnier to me than the Titan-focused scenes though.

It’s an Eren-centric episode, so it’s a little light on the other characters, but we did get Mikasa giving Eren a pep talk and Jean being outmanuevered by Sasha and Connie in a gear-using battle, so that was good. Armin is as cute as always, having traded in his futon for a futon-hood sewn by Levi. Next episode seems to move the spotlight off of Eren again and focus on Sasha and Armin, which I eagerly await (especially as it seems to be another new story, and the two characters don’t get much interaction in the source material).

The fact that I surprisingly prefer this show’s take on the 3DMG scene earns it a high Dio score.