Just a head’s up from Junko – there were meant to be other First Impression reviews done this month that ended up not possible due to other personal commitments – but we can hopefully get them in some form eventually. Sorry for the wait!

As for me, I don’t really have an excuse for why this review is late, so let’s just get on with it.

The kids are initially intimidated by the new obstacle at Grace Field – another adult to watch them, Sister Krone. But this act has actually given them a little more info about the outside world – Krone had to come from somewhere of course, and it implies the existence of other ‘farms’. The new baby Carol also turns out to be a blessing – the trio have already concluded that there are tracking devices somewhere on their bodies, but are unsure where – and any potential scars from the insertion would be long gone. As Carol is new, Emma is able to notice the mark behind her ear where some kind of small microchip must have been inserted. They also start ‘training’ the other kids for the eventual escape by playing tag.
Meanwhile, Krone has plans of her own. Isabella (aka Mama) fills her in on the situation – that one of the children knows ‘the secret’ – but forbids her from telling HQ, as she believes it something she can deal with herself. However, Krone longs for the top position of Mama and dislikes being subservient to Isabella, so decides to use this as an opportunity to usurp her – by finding out who the kids in question are and ratting them all out to HQ, presumably costing Isabella her ‘job’.

The children quickly realise how formidable Krone is – she is unbelievably powerful, fast and cunning – defeating them effortlessly in tag and upping the odds against them once more. And then they realise that there’s another threat present – when both Isabella and Krone stop bothering to monitor them all as much, it implies someone else is doing it for them. Which means there’s a traitor amongst the children.

If you had the same complaint as last episode – that the episodes have been introducing each new obstacle too quickly, you might also be annoyed at this one too – the kids are already having to deal with the traitor. I think the problem here is obvious – it’s the third episode, and we haven’t really spent much time with a lot of the characters. The idea of a traitor doesn’t seem to have as much weight as it should when, as viewers, we aren’t as familiar with the other kids as Emma is. But I do really love the scene where Emma realizes this and there’s that horror-zoom. While the story is throwing out obstacle after obstacle, it’s still rewarding seeing and satisfying how the kids deal with each one – however, it’s good to be reminded that they’re still young, still in a dangerous situation and still capable of being overwhelmed.

Anyway, I should probably talk about Krone. Yeah. I didn’t want to say much last time because I was genuinely hoping they’d tone her down. The good news is that technically they did, but the bad news is there is still something wildly uncomfortable about her design, her facial expressions and how she is framed in the story. By which I mean it’s super super racist. A lot of people are getting angry when people point this out, but… look. It’s true. Neverland is a really good manga, and it’s shaping up to be a really good anime. This fact doesn’t change that, but it being a good series also doesn’t change the fact that Krone’s design literally looks like a mammy caricature from 60 years ago, and that really needs to be acknowledged. Now, if this were something like One Piece where just about every character is designed in an exaggerated way, a design like Krone might be excusable. The issue is that – while there are some darker skinned children at Grace Field, Krone is the only one of prominence dark as she is, and she is the only character who is drawn like…well, that. She is the only character with a huge nose, huge lips and terrifying, clown-like facial expressions. The manga art especially goes well out of its way in making her look horrifying and almost grotesque when she wants to. When contrasted with the pale Isabella it’s even worse – because she manages to look terrifying only with her piercing stare. Her face doesn’t distort in the way that Krone’s does. Add in the fact that she’s extremely fast, strong and overall huge, she’s a mountain of ‘scary black woman’ stereotypes. It’s just…bad.

What sucks the most about it is that Krone is actually a really interesting character! She’s really over-the-top, she actually has a great scene in this where she monologues Isabella’s demise like she’s in a play. (However…in this scene she is also given a weird baby doll that she flings about sadistically and speaks to, which wasn’t in the manga at all, and makes her look completely crazy…so I’m in two minds about that scene as well) I also do really like the voice she was given, and the way she moves has a lot of character. I don’t think there’s any issue at all with making Krone – a black woman – more emotionally extreme than Isabella, but there’s a huge issue with a lot of the ways it’s portrayed that honestly weren’t necessary at all, especially when it’s only her being portrayed in such a way.

So yes, I do like this series a lot, but Krone is somewhat of a bump in the road, and disappointingly so. While she doesn’t ruin the series for me, I know she might for others.

Emma, Norman and Ray devote most of their time in this episode to trying to suss out who the informant – ie the traitor – amongst the children must be. They also devise a new strategy in ‘training’ the other kids – playing tag in teams, which raises their chances of success. Meanwhile, Isabella is once again very clear with Sister Krone that the identity of the children who found out the truth is strictly none of her business, and that she needs to keep her nose out of it and continue as normal. Krone, on the other hand, is once again only further determined to unseat Isabella as ‘Mama’, and she already suspects Emma quite a lot.

Norman also decides that they should set their escape date for a lot sooner than previously planned – as soon as Ray figures out a way to break the tracking devices – as it will be sooner than Isabella may expect – in order to take her by surprise. They also decide to tell the two other eldest kids what’s going on – Gilda and Don – although they are given a slightly altered version of the truth so as not to frighten them too much (substituting ‘demons’ with ‘bad people’, and ‘eaten by’ with ‘taken away by’. But there is another reason for this – Norman sets up a ‘trap’ in order to determine whether either is the informant – especially because Gilda is highly suspicious. However, as Emma eventually discovers, Gilda is completely innocent and Krone’s increased interest in her was due to Krone trying to force information about Emma out of her.
The identity of the informant – AKA the traitor – is found out by Norman’s trap…surprise! It was Ray all along. 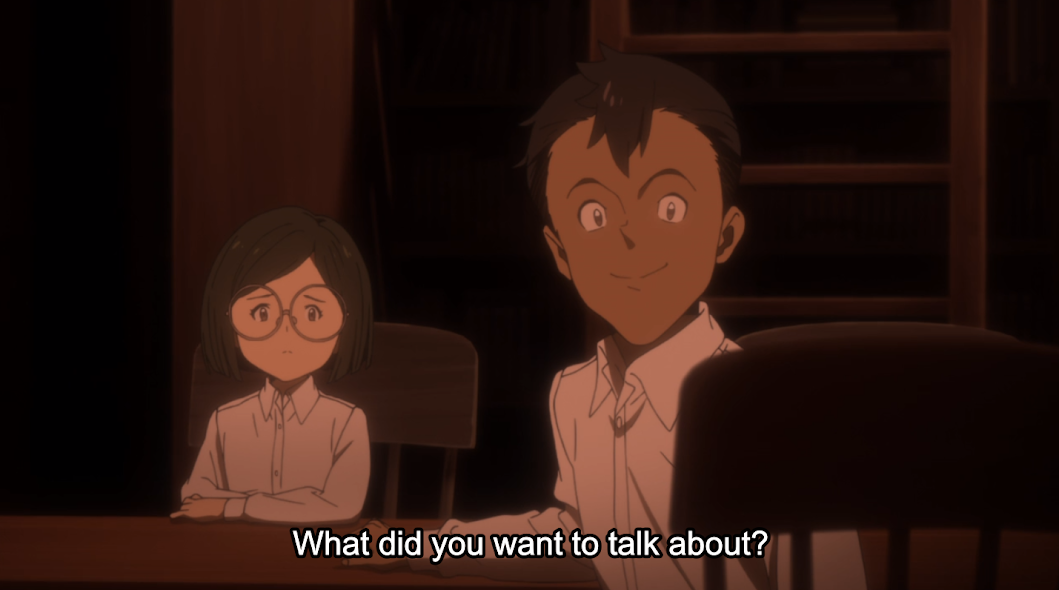 They sure make Gilda look as suspicious as possible compared to Don by making her look extremely nervous in the background.

I think that, with how fast the plot has been moving, it’s good to have it slow down a bit and focus mainly on the one thing (the identity of the informant). To be honest, it’s a little anti-climactic as a mini arc because as I already said, we haven’t really built an emotional connection with anyone other than Emma and Norman – so any of the other kids being a ‘traitor’ doesn’t hit as hard as it should. Gilda is suspicious to the point of being a red herring – yet we know basically nothing else about her at this point – Don even less so. And Ray, while I didn’t see it coming in the manga – already seems a bit more suspicious in the anime to me due to all the knowing glances he keeps doing. There’s also the fact that he takes the ‘news’ about the truth unbelievably easily, and doesn’t even question it. Still, the short mystery reaching its conclusion is satisfying due to the method Norman used being quite clever. He had suspected Ray from the beginning (or rather, trusted no one other than himself and Emma), and so was able to outsmart Ray purely by letting him believe that he trusted him with secret information, knowing that if anything he only told Ray would make it to Mama – say, the real location he hid the ropes – he would know there could only be one person she would have learned it from.

The training montage of the kids playing tag is also nice – I really like the scenes in the forest, and the music in this show is top-notch. They can’t keep playing tag forever, though, so I hope these scenes don’t get too stale too quickly. Watching all the kids together has also reminded me that we’ve yet to really have any kind of ‘roll call’ – I don’t even think we know most of their names.

Back on the subject of Sister Krone  – she’s still unfortunately creepy as ever, and I have to say I am really, really not fond of this extra aspect of her character they’ve added with the doll. While in the previous episode she crooned over it and treated it like a baby, or an audience for her soliloquy, in this episode she loses her temper and takes her anger out on it, eventually ripping its head off. It’s…disturbing? I assume they’re going for some kind of symbolism here, but again – playing up how scary and  violent Krone is really isn’t helping with her racially charged design. It’s an uncomfortable scene to watch, and it also doesn’t help that the doll looks like an even worse racial caricature than Krone herself often does. I’m really struggling to see the point in this doll and I’m beginning to wonder if they plan to work it into Krone’s eventual flashback.

Anyway, this episode was a little light on the action compared to previous ones, so I’ll be eager to see how far they get in episode 5.

2 thoughts on “Yakusoku no Neverland Episodes 3 and 4”